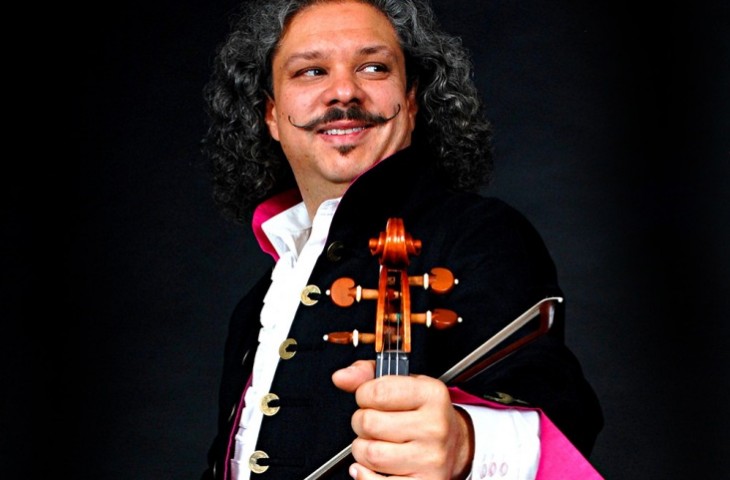 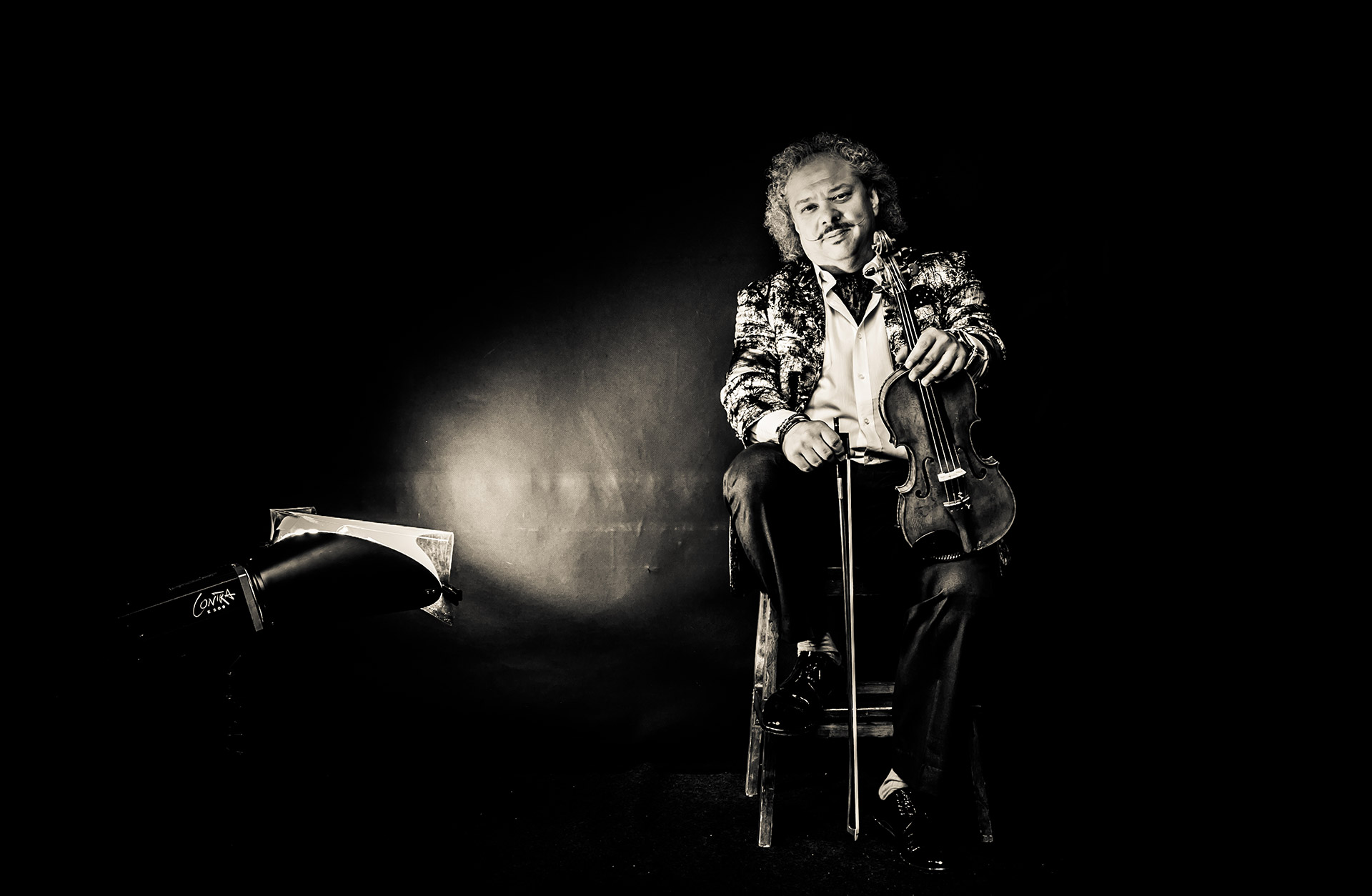 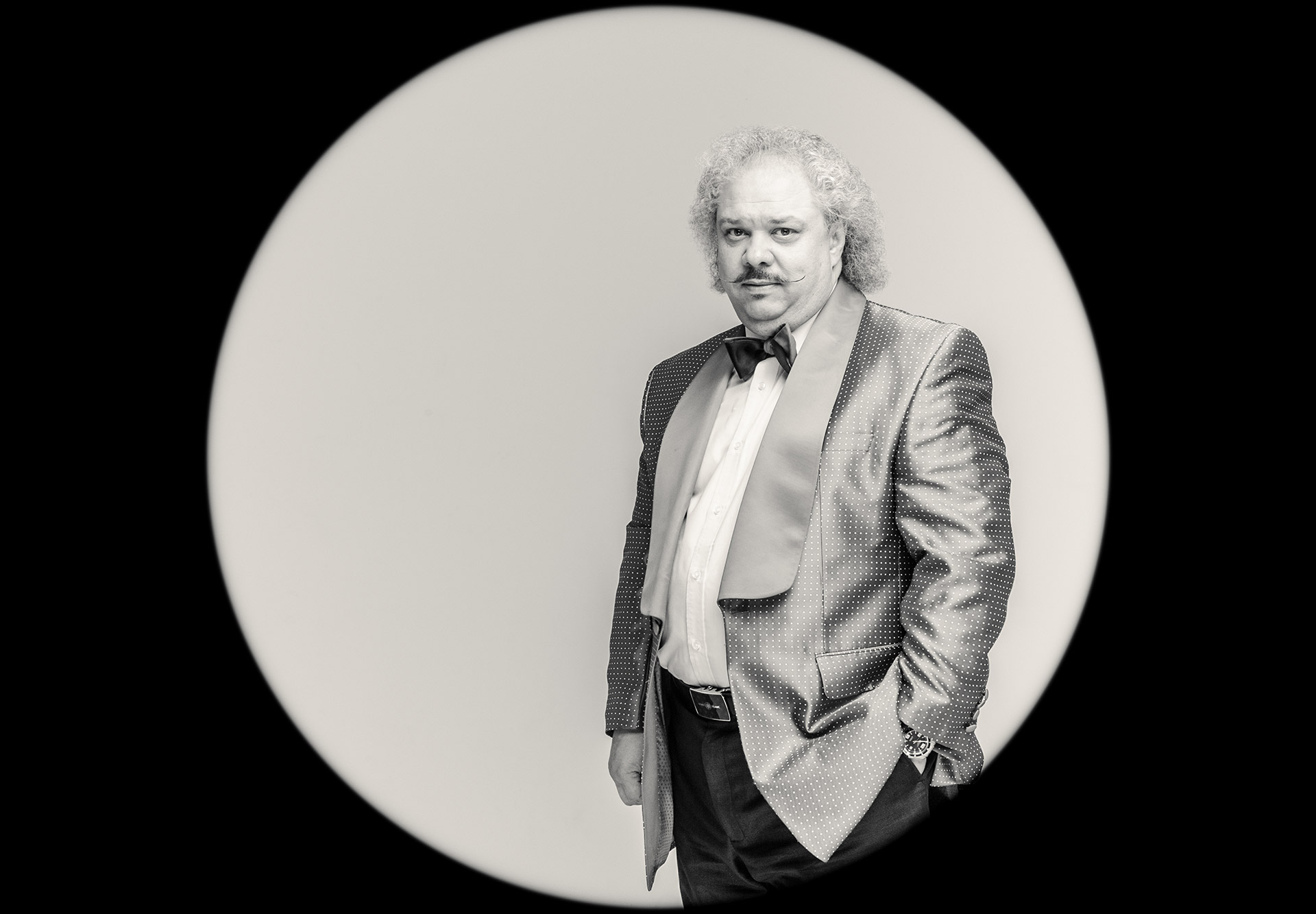 Roby Lakatos is not only a virtuoso on the violin, but also an extremely versatile musician who is equally adept to performing classical music, jazz and the folk idiom of his home country of Hungary. He is hard to define: most often, he is described as a Gypsy violinist, a devil’s fiddler, classical master, jazz improviser, composer and arranger – and his unique artistic personality is all that. He is a universal musician combining brilliant technique that makes him one of the best violinists in the world with creativity in improvisation and composing power.

Roby Lakatos was born in 1965 to a legendary family of Romani musicians as a member of the seventh generation of direct descendants to János Bihari – the famous “King of Gipsy Violinists”, who was admired by Ludwig van Beethoven, introduced Johannes Brahms to the themes for his Hungarian Dances and of whom Franz Liszt said: “The sweet tones drawn from his magic violin fell like drops of nectar on our enchanted ears.” From early childhood, Roby Lakatos lived with the musical tradition of his family – he played in his uncle Sándor and father Antal’s band and appeared as the first violinist of a Gipsy orchestra at the age of nine.

Thus, he learned the tradition of violin technique and ornamentation at an early age, but also gained formal education at the Béla Bartók Conservatory in Budapest.

After winning the first prize for violin at the age of 19, he left for Belgium and first played in Liège, and then in the newly opened club Les Ateliers de la Grande Ile in Brussels, which quickly became a hotspot thanks to him and his ensemble. In the ten years of performing in the club, the ensemble attracted numerous fans: the shows were regularly visited by Sir Yehudi Menuhin, for example, and Roby made connections and collaborated with a number of musicians, including violinist Vadim Repin and his role model for violin jazz music performances Stéphane Grappelli.

His concert career developed gradually, and now Roby Lakatos spends most of his time performing in various stages around the world. His ensemble has appeared, among other places, at the Schleswig-Holstein Festival, in Académies Musicales de Saintes, Ottawa Chamber

Music Festival, Ludwigsburg Schloßfestspiele and the Helsinki Festival, as well as in prestigious concert halls (Santa Cecilia in Rome, Concertgebouw in Amsterdam, Zankel Hall – Carnegie Hall in New York). His versatility has given him and his ensemble the opportunity to collaborate with major orchestras–The London Symphony Orchestra, French National Radio Orchestra, Dresden Philharmonic Orchestra, to name a few – as well as with numerous exceptional artists, including Giora Feidman, Herbie Hancock, Joshua Bell, Maksim Vengerov, Nigel Kennedy and Randy Brecker. In Hong Kong, Taiwan and Japan he first performed in 1999, and has since been regularly playing in Asia. He records for Hungarian and Belgian television networks and has also appeared on German television and German national radio stations, as well as on BBC in London.
Roby plays a violin made by Fabien Gram.

Seven years after the release of their 1991 album Gypsy Style for MW Records, The Roby Lakatos Ensemble recorded their first CD for Deutsche Grammophon, titled Lakatos. With a presentation of a unique style, which is a fusion of typical Gipsy music elements and jazz with improvisation as an important feature and specific technical effects, some of which he created himself (such as the fascinating left-hand pizzicato), Roby Lakatos and his ensemble also reflected a universal approach to the musical material by including on their CD the works by composers ranging from Zoltán Kodály and Johannes Brahms to John Williams’s music for Schindler’s List and Charles Aznavour’s chanson La Bohème. This album, which received the prestigious German Echo Klassik award, was followed by four more releases for Deutsche Grammophon: Lakatos Gold and Post Phrasing (1998/1999), Live From Budapest (1999), and As Time Goes By (2002) offering an equally exciting combination of jazz and Gipsy music idioms with contemporary and classical elements. Apart from recording for other labels – With Musical Friends (Universal, 2001), Kinoshita Meets Lakatos (Prime Direction, Inc., 2002), Prokofiev… (Avanticlassic, 2005), Fire Dance (Avantijazz, 2005) and Klezmer Karma (Avanticlassic, 2006) – Roby Lakatos also started his own label Lakatos Recording Company to present somewhat different music, i.e. experimental works such as the project named The Legend of the Toad (2004), which is a sort of musical story told through his performances and the performances of his ensemble whose member, pianist Kálmán Cséki, also arranged the music.

Except for his long-time associate, violinist Lászlo Bóni, Roby Lakatos’s ensemble today is composed of young virtuoso musicians with classical musical education who are also well versed in the folklore tradition of Hungarian Gypsies.